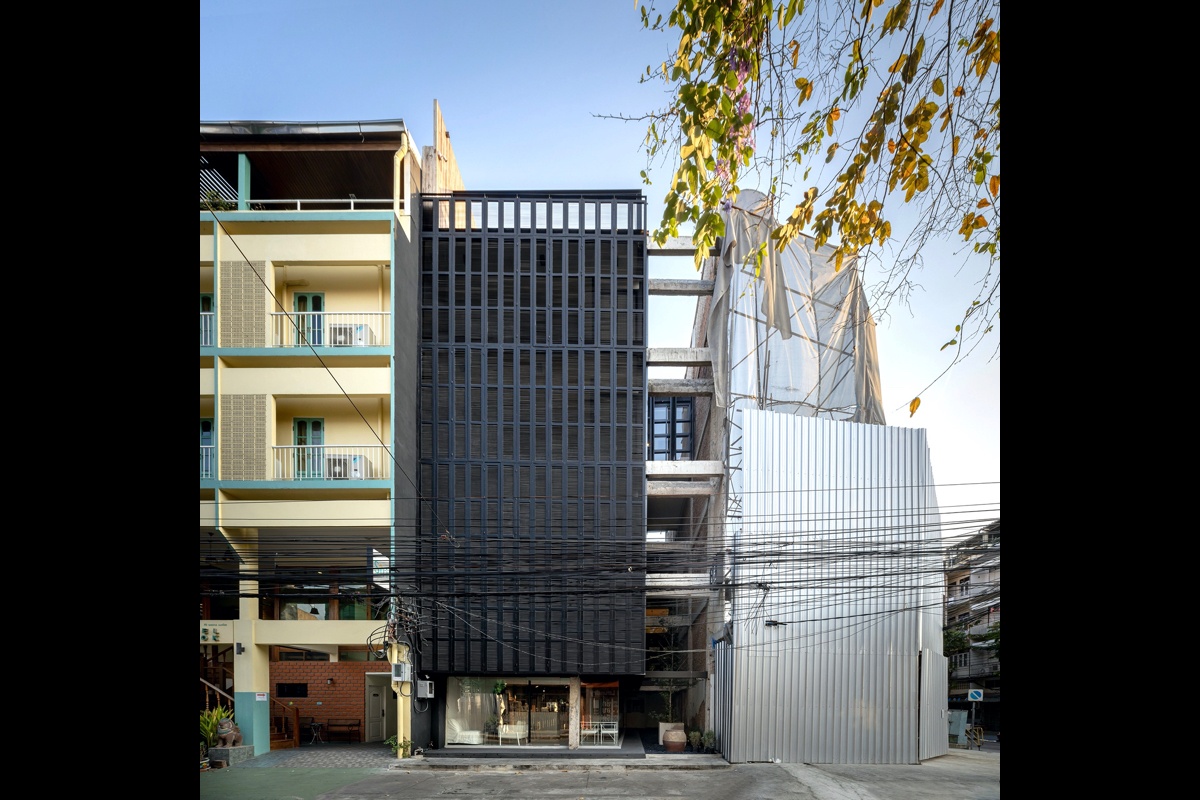 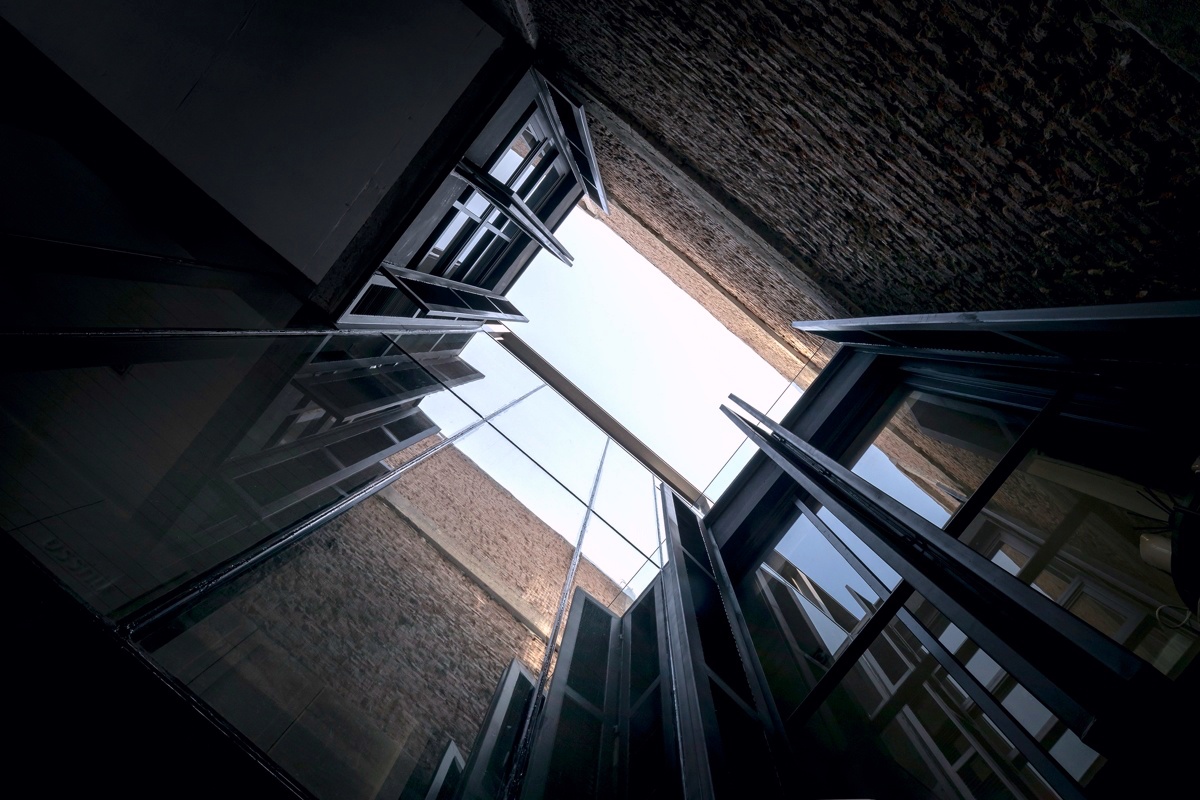 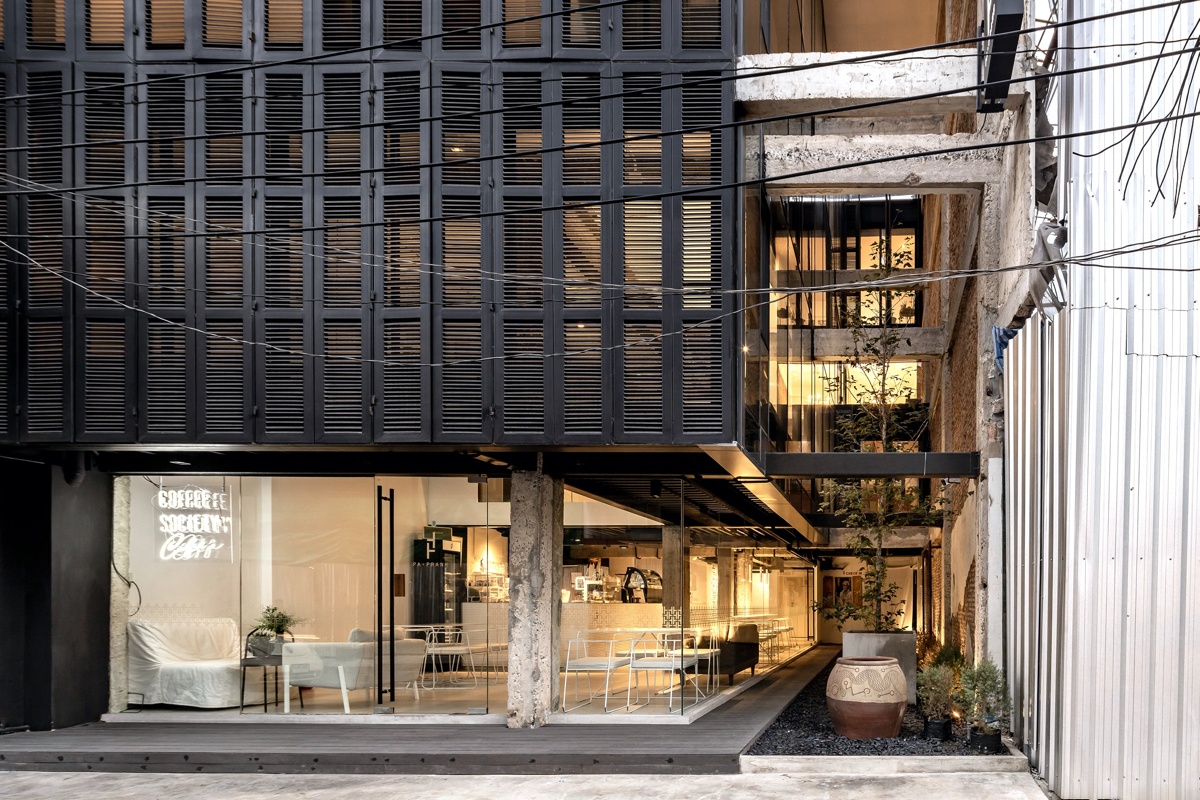 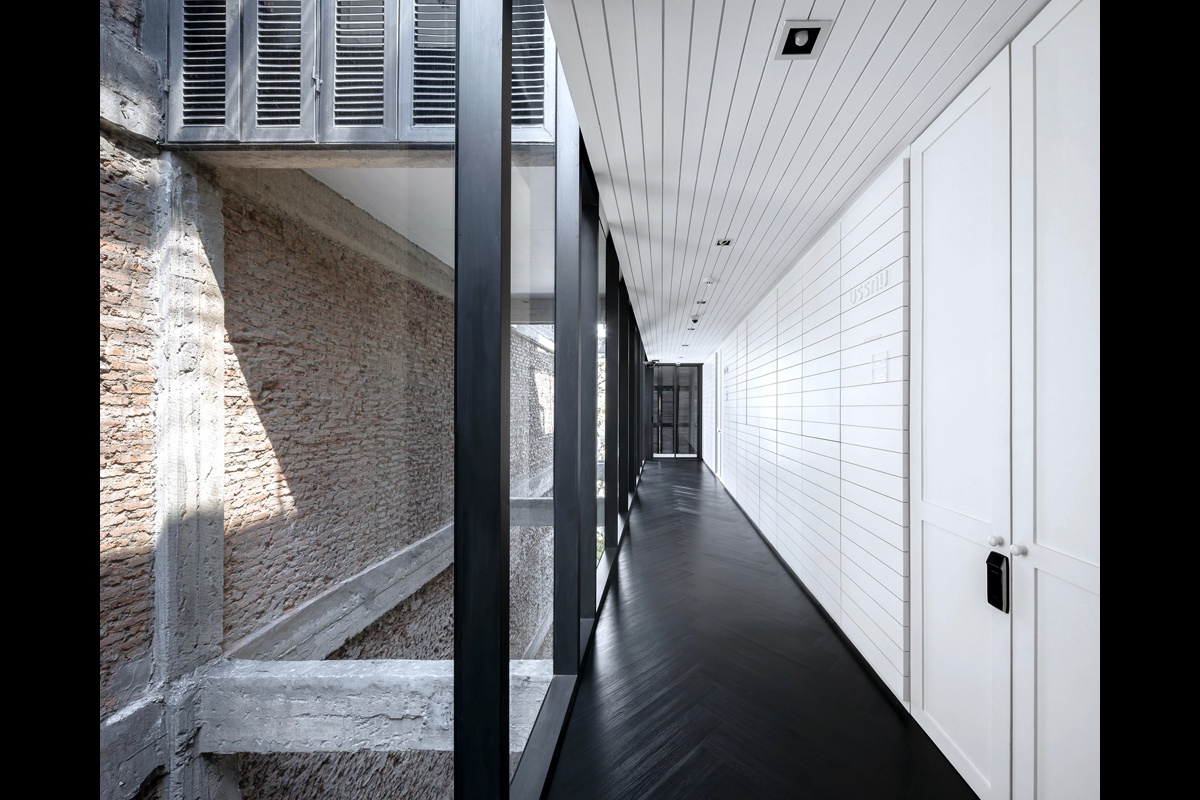 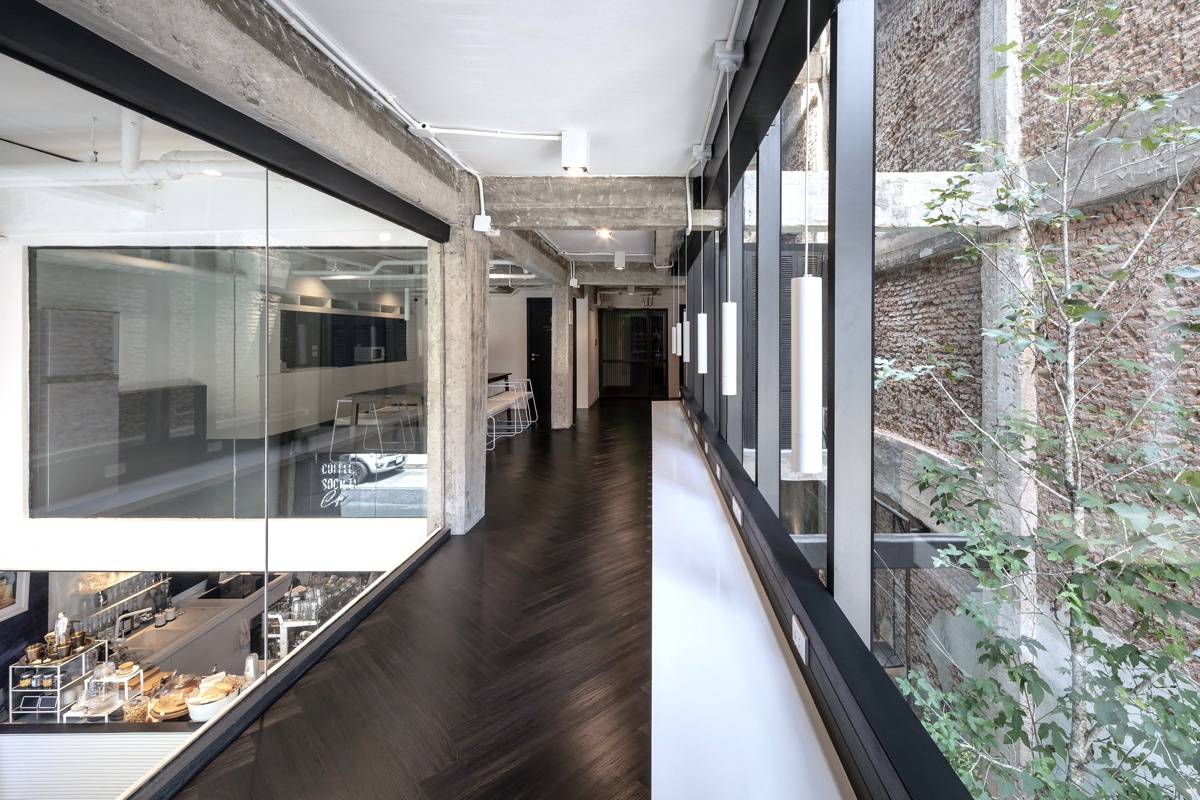 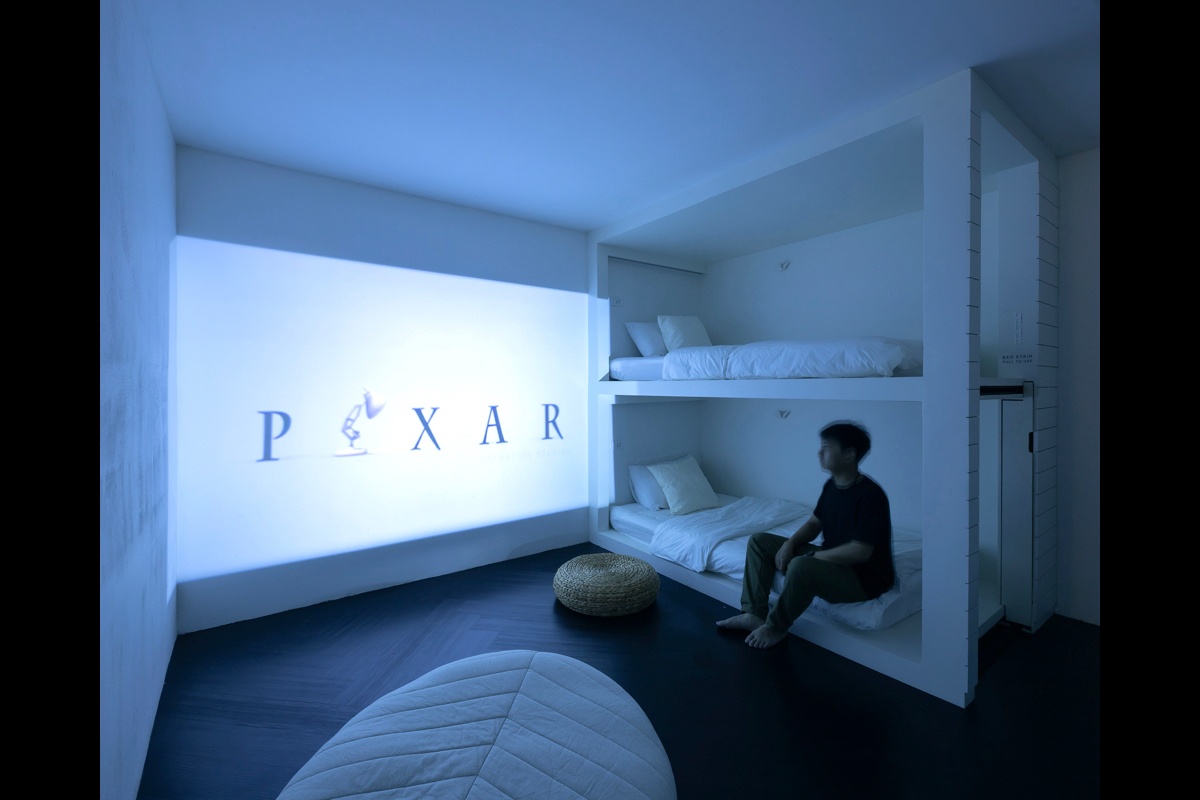 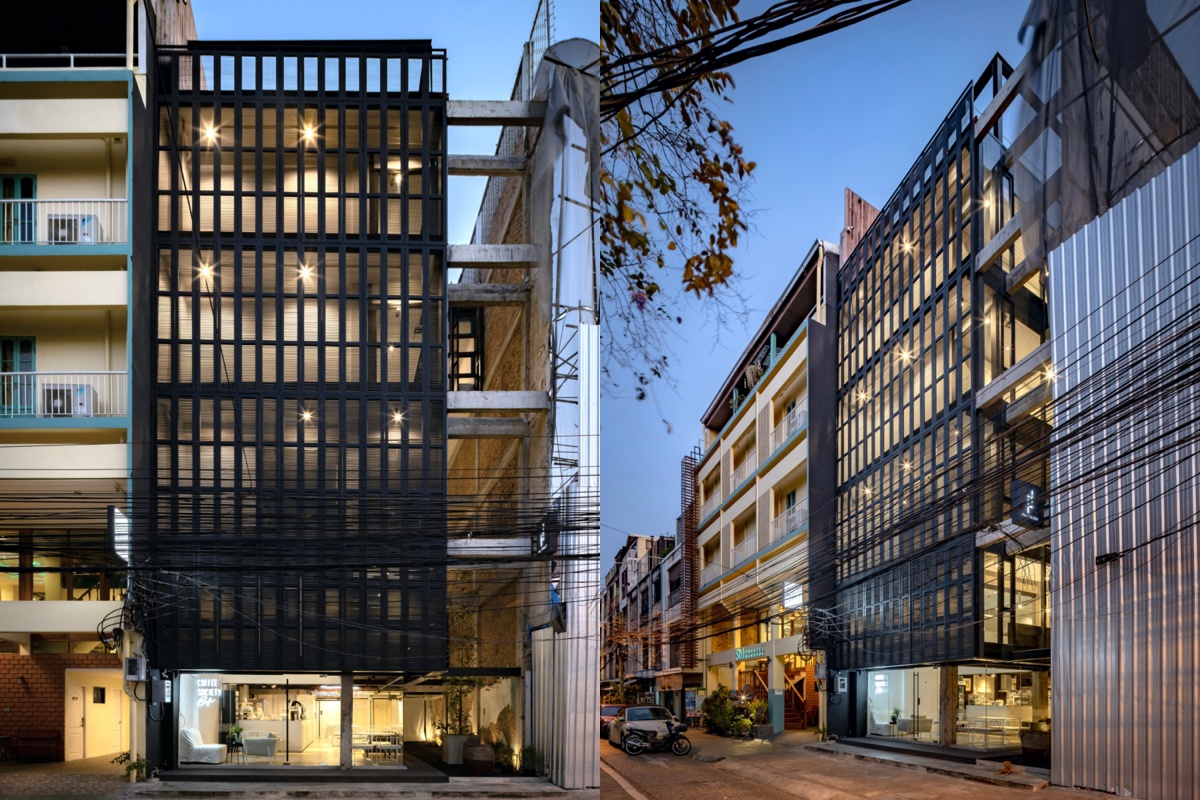 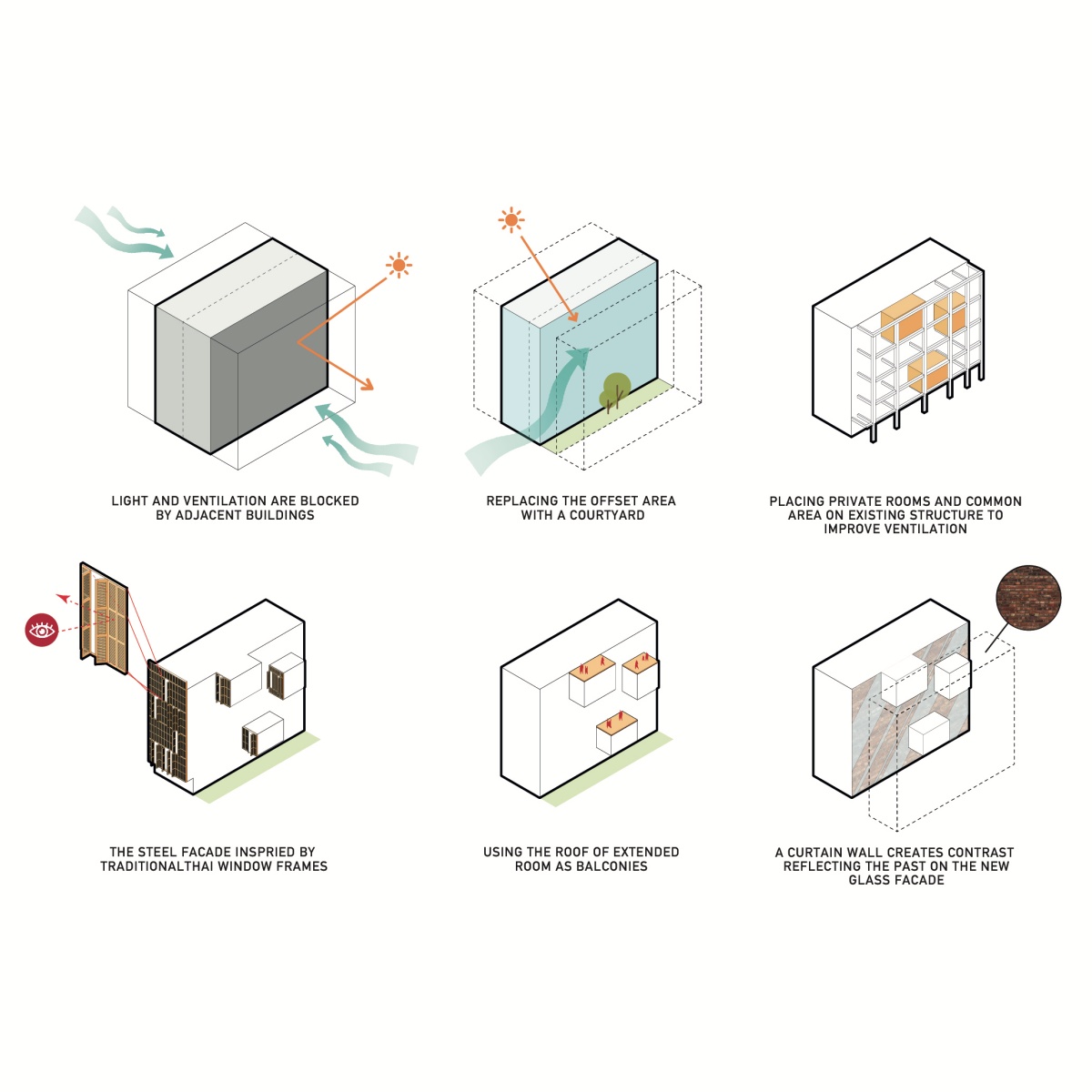 Pa Prank hostel is a renovation project that transforms two shophouses into a hostel with a cafe. Close to several famous tourist attractions of Bangkok, it is located at the district of Prang Sappasat, one of the most famous historical communities. Unlike the stereotype of the renovation project, the hostel has traded-off a quarter of usable area to increase the quality of the place by enhancing the quality of space, light, and air ventilation altogether. It stayed away from a conventional solution which typically intends to maximize the number of guest rooms and elaborate on stylish or fanciful interior decoration.

The core concept of the design comes from the shophouse’s common problems – a lack of natural light and quality of space inside a building. Usually, this building type’s plan has a long rectangular shape and two sharing walls with the adjacent units on both sides. Only a little daylight can pass through the front side of the building due to its typical characteristics.

A strip-like area with two meters wide was stretched out from the front to the back of the shophouse as comprehensive design solution. The designer removed all walls and floors on every floor to make a direct way for the natural light and air ventilation to come inside the building. The ventilated area on the ground floor becomes a small courtyard. The design feature opens a new possibility for creating unique private guestrooms that seem to be floating in space. The rooms have two sides of openings for daylight and natural ventilation, a rare feature amongst the similar facilities nearby. The top of the rooms is a place for a balcony for the rooms on the higher level.

The existing structure, along with the chapped brick wall, is in contrast with the newly-added building parts. The play between new and old is intentionally expressed in the courtyard. The rough and coarse surface of the preserved old brick wall of the former building becomes a reminiscence of the past days. The contrast does not revolve within the site boundary but also keeps playing with its neighborhoods.

The idea of ‘being modern among historical surrounding’ reconnects the building with the urban context. By doing so, a large curtain wall was chosen as an element for enclosing the functional areas along the building’s depth to reflect the well-preserved wall. On the other hand, the visitors can see a reflection of the old walls on the modern window, and the guests can have the scenery of the wall in daylight from inside the building.

The characteristics of the Thai traditional shophouse’s window inspire the front facade design, but the contemporary way of living also blends into the materialization of the idea. New materials like steel and black color are the main feature, leading the building to disappear from the surrounding context. In contrast, interior spaces are mainly decorated with the original traditional window’s character, and the designer adopted the white color for a comfortable feel.

Convenience for users is the primary concern for the functional arrangement. The mezzanine floor’s common area has convenient access from both the cafe on the ground floor and the activity area and guestrooms on the upper floors. Above the common area is the zone for bathroom, locker rooms, and laundry, leaving the third and fourth floor to be the places for all guestrooms. Finally, the yoga and boxing class zone are located on the rooftop floor, where indoor and outdoor activities happen against the backdrop of the beautiful historical scene.

The project’s challenge was to convince the owner to open the mind for the benefits in return, which could be proved only when the construction was completed. The natural light reaches the first floor while making a reflection effect on the brick wall. The feedback from the users finally proved that the design solution is a worthy endeavor. They feel that the building’s space becomes more spacious than expected, even though some parts of the floor had been cut off. Moreover, this project expresses the fusion of the spirit of modernity and the traditional elements while altogether still respects the surrounding context.